Runners say ‘I do’ during Huntsville Half Marathon 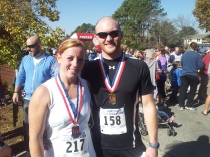 Jessica and Daniel Clanton, two runners from Arab, Ala., got married during Saturday’s Huntsville Half Marathon.

The 2012 Huntsville Half Marathon kicked off Saturday morning, but it wasn’t just another run for Arab residents Jessica Dobosz, 29, and Daniel Clanton, 27. The two exchanged wedding vows along the Aldridge Creek Greenway, right around mile 9.

“We wanted to do something fun and different,” the now Jessica Clanton said.

Jessica wore a white workout outfit, complete with a ruffled skirt and sweet veil. They had a small bridal party, friends and fellow runners who stood by them during the informal creekside ceremony. Daniel’s stepfather, Forrest VanSandt, an associate pastor at Liberty Church in Arab, officiated.

Some 1,000 runners registered for this year’s Huntsville Half and many of them congratulated the Clantons, wishing them well before, during and after the race. 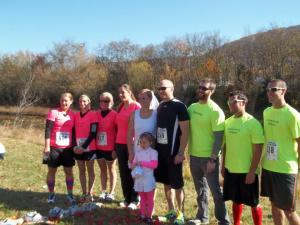 The happy couple poses for a picture after saying “I do” during the Huntsville Half Marathon.

Even though the couple stopped to get hitched, the Clantons still beat me to the finish. I am totally okay with that!

“He carried me across the finish line,” said Jessica, laughing.

The couple’s romance blossomed over the past year,  when Daniel started running—something Jessica had been doing for quite some time. But they’ve known each other “forever.” Daniel’s longtime best friend is Jessica’s brother.

The Clantons decided their Huntsville Half wedding would not only be the beginning of their lives together, it would also be the starting point of a shared goal: running a half marathon in every state.

They don’t know where their second half will be, but they aren’t worried. After all, they have a lifetime to figure it out, 13.1 miles at a time.

I'm a Minnesota native with an Alabama heart. My husband, David, and I landed in Huntsville in the late 90s through my former career in TV news. We have two amazing girls, Serina and Sophia, whom we are raising with God's guidance and grace. Besides faith and family, my passions include writing, walking, running, friends and life in general. By day I'm a professional fundraiser for the totally awesome HudsonAlpha Institute for Biotechnology.
View all posts by minndixiemom →
This entry was posted in Fitness, Running and tagged Half Marathon, Marathon Marriage, Marathon Wedding, Running. Bookmark the permalink.

1 Response to Runners say ‘I do’ during Huntsville Half Marathon