When snow falls in the South

Sophia after hammering me with a snowball.

Usually, when snow falls in the South, schools close, roads shut down and CHILDREN CELEBRATE!

Do you hear that? Yes, kids are squealing because it snowed in Huntsville.

We actually awoke to more than an inch of snow in North Alabama Tuesday morning. Our daughters, Serina and Sophia, were beyond thrilled. Sophia saw the magical scene outside and started singing “Do You Want to Build a Snowman?” from Frozen. A friend’s child exclaimed, “Elsa made it snow!” (Yes, the Disney movie was a huge hit in Huntsville.)

Of course, mention winter conditions in the South and it still stings for some. This snowfall fell on the heels of the catastrophic 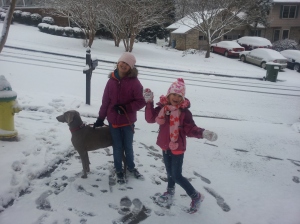 weather event that struck the Deep South less than two weeks ago. What my fellow southerners in Atlanta and Birmingham endured was shameful. And by all accounts, unnecessary.

Fortunately, at least in Huntsville, this week’s snowfall is much more manageable. Superintendent Dr. Casey Wardynski called for a two-hour delay the night before and waited until morning, when the weather situation could be fully assessed, before deciding that classes would be canceled.

My friend, Ann Dennen, made a snowman with her kids. There was even snow left to spare!

Area businesses encouraged their employees to use their own judgment. As I drove to HudsonAlpha, I heeded my boss’s advice to take my time and be careful. On the way in, I was impressed by other motorists who appeared to be doing the same. Sure, my commute time doubled, but I was in no rush.

Yes, there are thoughtless (lazy?) drivers everywhere and Huntsville is no exception. Let’s take, for instance, the woman who didn’t wipe the snow off  her vehicle’s rear window. But I remember seeing cars just like that, and worse, when I lived in Minneapolis. Dumb drivers hit the road in every region and in all weather conditions.

When it’s not wreaking havoc on a major metropolitan city, or even a smaller one, snow is beautiful, another example of God’s handiwork. It’s the source of joy and laughter for kids of all ages, most of whom (like mine!) go out underdressed thanks to a lack of proper winter gear. They wear tennis shoes instead of boots; jeans instead of snowpants; and knit mittens that let the wet snow soak through before the snowman’s base is completed. (Thinsu-what?)

As a former Minnesotan, I know a couple of inches might seem like child’s play to hearty Midwesterners and Northerners. But for children who rarely get to experience the magic of snow, this is a Disney dream come true. It may get better — way better — with up to a foot expected Wednesday.

Wherever you are, in between snowmen and snow angels, remember to enjoy lots of hot chocolate with plenty of marshmallows. You may also want to conserve energy. Hint: Keep the heat down and cuddle with your kids — that’ll warm your heart most of all.

I'm a Minnesota native with an Alabama heart. My husband, David, and I landed in Huntsville in the late 90s through my former career in TV news. We have two amazing girls, Serina and Sophia, whom we are raising with God's guidance and grace. Besides faith and family, my passions include writing, walking, running, friends and life in general. By day I'm a professional fundraiser for the totally awesome HudsonAlpha Institute for Biotechnology.
View all posts by minndixiemom →
This entry was posted in Family, Southern living and tagged Deep Freeze 2014, Disney, Frozen, Huntsville AL, Southern Snow, Winter Weather. Bookmark the permalink.