Posted on December 8, 2017 by minndixiemom

For years, I talked about enrolling our daughters, 10 and 12, in a self-defense class. One mass shooting after another (Sandy Hook, Aurora, Charleston, and Orlando, for instance) was shaking our nation. After each one, I, like so many others, shuddered with horror, mourning the innocent lives lost and feeling absolutely helpless.

I held my children tighter, as I do anytime I hear about a crime against a child, including child abductions. The prospect of someone harming my child terrifies me.

Of course, I know you can’t live in fear, but that doesn’t mean you can’t arm your kids with knowledge, tools and strategies that can help them fight back should they ever find themselves in a dangerous and threatening situation, like an active shooter or abduction attempt.

Fortunately, I know an amazing person who understood my qualms. Last weekend, my girls, Serina and Sophia, along with several of their fellow tweeners, took a one-day self-defense and situational awareness training provided by former Navy Seal and CIA operative Brett Jones.

Jones currently works full-time at Riley Security, the company he co-founded in Huntsville. He also works tirelessly to provide self-defense and situational awareness training to folks across North Alabama and beyond.

“It’s a passion I’ve had my whole life,” said Jones. “As a Navy SEAL, CIA agent, or the owner of a security company, I have a passion for protecting people or educating them to protect themselves.”

While Jones has trained many adults over the past 20 years, this was his first go with kids. He did great! Jones started with basic lessons, explaining levels, or conditions, of  alertness, or awareness. It starts with white, when you are relaxed and unaware. It can move into yellow, when you are still relaxed, but aware of your surroundings. In Orange, you’ve noticed something that may or may not be a threat to you; you narrow your focus and pay attention.

When you hit red, you’re aware of a definite threat and you:

In that order. Run as far away from the noise, commotion, or threat as you possibly can. If you can’t run any further, hide. They practiced this, first as a group, with Jones storming into the room. (Serina, our oldest, climbed into a trash can, successfully hiding from the acting assailant.) If you can’t hide, then it’s time to fight.

The girls learned how to hit (not with your fist, but with your palm) and where to hit 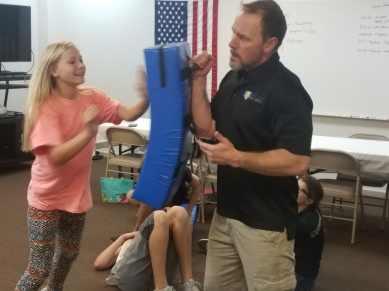 (the face is a key target).  Keep hitting, one hand after the other, making sure you keep your non-hitting hand near your face to protect you.

Jones, donning protective “armor,” feigned a threatening situation with each individual child, giving them an opportunity to run, hide and fight.

The girls had a great time, especially when they got to hit a grown man. There was laughter and light-heartedness during the day, but ultimately, they recognized this experience for its serious, potentially lifesaving lessons. I know there are some cases when the most situationally-aware person can’t get away. I also know there are situations in which the best self-defense moves can’t defeat an assailant.

But I also know that this knowledge and these tools can at least give them a greater chance of escaping. Of surviving.

Each time the girls raced out of harm’s way in the scenarios Jones created, or hid in a very clever spot, or managed to outmaneuver the “bad guy,” I saw their confidence grow. My peace of mind grew as well.

If you’re interested in self-defense and/or situational awareness training for your group, business or municipality, email Jones at bjones@rileysecurity.net.

“If it is an entity that is legally required to carry a weapon because of their job, I provide some really great active shooter/killer training for free,” said Jones. “Nobody else in the state is qualified to teach it. It’s good stuff.”

Fortunately, the girls didn’t scare him off. Jones is also looking forward to training more children.

I'm a Minnesota native with an Alabama heart. My husband, David, and I landed in Huntsville in the late 90s through my former career in TV news. We have two amazing girls, Serina and Sophia, whom we are raising with God's guidance and grace. Besides faith and family, my passions include writing, walking, running, friends and life in general. By day I'm a professional fundraiser for the totally awesome HudsonAlpha Institute for Biotechnology.
View all posts by minndixiemom →
This entry was posted in self-defense, Uncategorized and tagged Alabama, mass shooting, self-defense, situational awareness, Youth. Bookmark the permalink.